Visitors 871
22 photos
This unusual cruiser was delivered March 22, 1938, and although 300+ were built from 1937-1939, only two others are known to exist. This one was restored to original, as-delivered condition by Dave Lobb at Northwest Classic Boats in 2010.
She's won six national and international awards from 2010 to 2012, including Best of Show over 23 feet at the 2010 Lake Tahoe Concours D'Elegance, and ACBS International Restored Boat of the Year 2015, right here in Minnesota at Woods and Water! Recently awarded the very first Diamond Circle award at the 2016 ACBS International Show in Lake Tahoe, given to the highest scoring boat among the past five years' winners, as well as the BSLOL Bob Speltz Spirit of the Sport award, for the highest scoring boat also participating in the ACBS International Show pre-events.

Less than 30 hours have been put on her rebuilt Chris-Craft model K 85 hp six cylinder engine. She has a large, open aft cockpit, with flat floor, as the engine is mounted below-decks. Her cabin sports fold-up seatbacks on the outboard settees, so four 6'1" berths are provided. Her galley includes an alcohol stove, china sink, 15 gallon water tank, and icebox. Instrumentation includes the Stewart-Warner three gauge (tach, oil pressure, and amps) "buoys and boats" panel, plus a water temperature gauge. Note the white canvas weathercloths on the cockpit rails. Includes galvanized tandem axle trailer with disc brakes, and new tires in 2014. 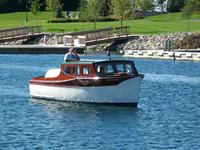 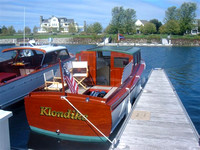 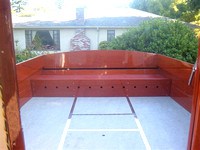 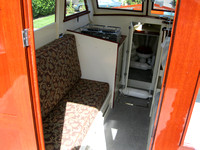 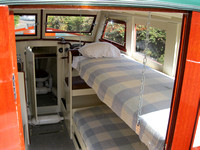