Visitors 1479
15 photos
When Aly Salomone Khan, the third husband of Rita Hayworth, purchased the Riva Tritone christened "Piranha", the export price to the U.S. would have been $14,740. For reference, the Mercedes-Benz 300SL Gullwing, the most expensive imported automobile available in Italy at the time, retailed for the equivalent of $12,000, and a Rolls-Royce Silver Cloud cost $13,250.

Rita Hayworth was known not only as an accomplished actress, but also for the men in her life, including her second husband, Orson Welles, and her third husband, Aly Khan. Details of how she came to own Tritone #93 are sketchy, but she is listed in the Riva archives as the owner.

The boat was subsequently owned by tennis champion Jean Noel Grinda, and came to the U.S. in the late 1960's. Restored in the early 2000's, "Piranha" has been meticulously maintained by the same craftsmen at Freedom Boat Service who undertook the difficult 4000 hour restoration.

Although some might replace the planking with newer and easier to install laminated panels, the hull sides have been correctly re-planked with continuous planks, stem to stern, with no vertical butt seams, just as it was built originally.

Restoration required planks of 36' in length to size and fit the curves of the 26' hull. The bottom, chines, keel, and frames were all replaced, duplicating the correct green bottom color with dual white boot stripes. All told, approximately 85% of the wood is new.

Tritone #93 was a boat of firsts, which were preserved in restoration, including the first use of the modern, "Calyx" steering wheel, and the "Zebrata" zebra-patterned upholstery. The convertible top is also done in the correct green color. With the original Riva/Chris-Craft MCL six cylinder engines lost to time, twin modern, fuel injected Crusader 350 cubic inch 330 hp V-8's have been fitted, delivering exceptional performance. 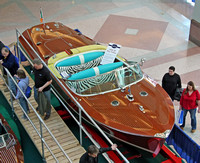 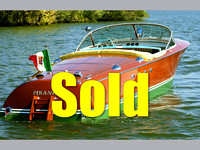