Why It’s Important:
The Leveau design hydroplane won many races in the 225 ci hydroplane class in the mid-thirties, establishing world records at 46.53, 46.779 and 49.236 mph. It was originally powered with a 225 ci Lycoming Engine, which was guaranteed by the Lycoming factory to produce 155 hp. The replica is powered with a Chevrolet V-6. Walter Leveau was the chief designer of the Horace E. Dodge Boat & Plane Corporation from 1929 through 1935, roughly corresponding with the demise of the Dodge Boat Company. He designed virtually every Dodge boat during his tenure, including bottom designs for many of the famous Dodge racing boats including: Delphine IV and Impshi. 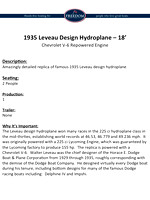