Visitors 700
4 photos
Built in 1948 in Ventnor, NJ and originally shipped to Lake Minnetonka in Minnesota. The boat was raced on the lake until 1955 when it rolled during a race. At that point the boat was put in a garage and forgotten until the late 70's. She was discovered by Allan Firth from California, who purchased the boat and had her shipped to California where she was stored in a tractor trailer box. In the mid 80's, when the delta flooded, the boat traveled several miles down river in the tractor trailer box and somehow sustained no real damage. After Firths' death the boat was purchased by a local Californian who began the preservation process. She made her debut at the 2005 Tahoe Concours d'Elegance. She was purchased by the current owner in 2006. The boat is correct in all aspects. This is the sixth of the six 23' twin engine Ventnors built. Only three of the six are known to exist, and only one other has been restored. The boat tops out at over 50 mph, powered by twin Gray Marine "Fireball" six cylinder engines.

Tandem axle trailer and mooring cover are included in the sale. 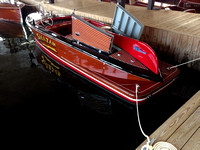 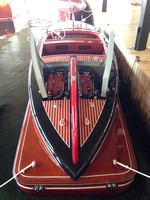