Visitors 640
7 photos
This 1925 26' Great Lakes Boat Building Company runabout is ultra-rare: one of only two known to exist. The company was founded in Milwaukee in 1916, and moved at some point after 1930 to Chicago. Known for larger vessels, both private yachts and commercial ships, no record exists of how many runabout-style boats the company may have built. We assume very few, as there's no mention of smaller vessels in any of the company history.
This boat was built in Milwaukee and delivered by freighter to the Les Cheneaux Islands in Michigan. Maybe four owners since new, including the current owner who's enjoyed her for many years.
Wood looks almost all original, maybe three planks replaced on the deck, where it appears something may have fallen on her years ago.
As with many boat of this age, the original (Universal) engine has been replaced with a 1950's Chrysler Crown six cylinder.
All the brass hardware is original, with the exception of new rub rails, which were painstakingly duplicated. The removable aft windscreen was recreated from sketches provided by the original owners prior to their passing.
Likewise, the original leather color was duplicated with great effort, as well as confirmation by Eagle Ottawa Leather that the yellow was indeed a color offered by their factory in Milwaukee in 1925. Note original photo of sister ship.
Included in the sale is all documentation, a custom made tandem axle Integrity trailer, and a waterline mooring cover.
Priced at $89,900
© 2022 Freedom Boat Service. Proudly featuring Chris-Craft, Century, Gar Wood, Riva, Hacker & Lyman wood boats 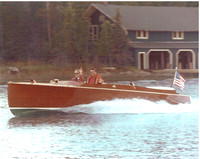 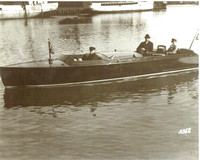